Sarah began her martial arts training in 1996 at age fifteen.  Her first introduction was soon after she met Gary, when he would teach her traditional martial arts in the front yard of her childhood home.  The same year, she found her way to a local Mixed Martial Arts (MMA) school in Salem, Oregon and fell in love with the more modern training styles, which included Brazilian Jiu Jitsu and Muay Thai Kickboxing.

Gary began his martial arts training in 1984 at the age of six.  Having trained in various martial arts, by the time he was eighteen he was an instructor at a local Kenpo school.  In 1998, Gary joined Sarah at her MMA school.

When their local school closed they moved to Portland to continue their training, quickly moving in to coaching roles.  Seeing the need for a comfortable and dedicated space for women to train, they cultivated the idea of a female-focused Mixed Martial Arts school and opened G.I.R.L.S. Gym in 2005. 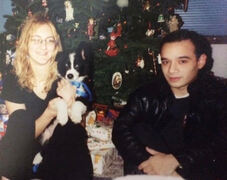